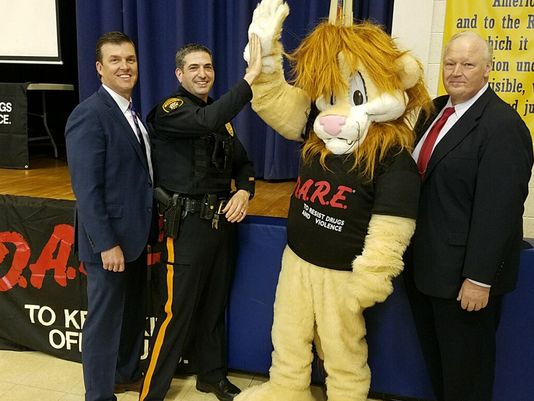 MANVILLE – With the country struggling to find ways to combat drug abuse, Manville schools have returned to a strategy that has proven effective.

D.A.R.E. teaches young students e how to make decisions for safe and healthy living. The program was a presence in most school districts across the country after it was introduced in the 1980s.

In the D.A.R.E. program, police officers go to local schools and teach kids how to live drug-free lives confidently, drawing on the strengths of the students, their families, and communities. The program, a key component of community policing, also teaches kids not to be afraid of police officers.

When the recession struck a decade ago, police departments and school districts, feeling the vise of tightening budgets, abandoned their D.A.R.E. programs.

But now with the opioid epidemic, D.A.R.E. is making a welcome comeback as more and more police departments and school districts are realizing the value of investing in a program that targets kids before they become susceptible to temptation.

“D.A.R.E. is very important to all of us,” Somerset County Prosecutor Michael Robertson told the graduates and their guests.

Robertson told the students that D.A.R.E. will teach them how to make the “right decisions” as they face as they grow up. The prosecutor also suggested to the parents at graduation to maintain a “constant dialogue with your kids” and always be parent, instead of being a friend to their children.

Mayor Richard Onderko, who said that at the age of 57 he has “lived my life drug-free,” thanked the Manville Police Department for bringing back the D.A.R.E. program. The mayor invited the students and their parents to attend the police department’s National Night Out program in August.

For Manville Police Det. David Sheffrin, the graduation was more than honoring the accomplishments of the students, it was a celebration of the close.

When faced with a problem or a choice, Sheffrin said, kids must first define what is going on, then assess the situation. That will allow them to make the appropriate response and later they can evaluate the consequences of their actions, he said.

Sheffrin said that after completing the exercises in their workbooks, the students performed skits to show what they had learned.

Roosevelt School Principal Jamil Maroun thanked the police department and Chief Mark Peltack for bringing back the program. Maroun said the D.A.R.E. program teaches “a lot of skills that last throughout your life.”

“We’re very proud of you,” he told the students.

From my central jersey