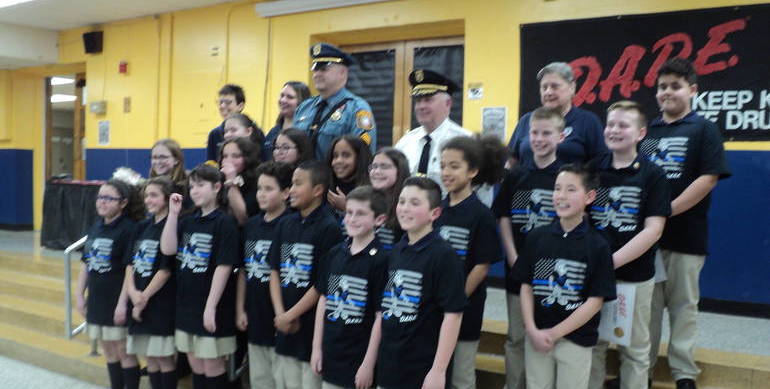 HASBROUCK HEIGHTS, NJ – Fifth-graders at Corpus Christi School have been participating in D.A.R.E., a once-a-week anti-drug program led by Det. Sgt. Alan Baker over the past school year. The annual program finished with the culmination, or graduation on Wednesday, March 4. This was the 30th annual D.A.R.E. culmination ceremony for Corpus Christi.

D.A.R.E., which stands for Drug Abuse Resistance Program, originated in Los Angeles in the 1980s and eventually became implemented throughout the United States and other countries as well. In Hasbrouck Heights schools, Det. Sgt. Alan Baker meets with the fifth-grade classes once a week to teach them the dangers of drugs, alcohol and tobacco; and to train them in strategies that can help them resist temptation and pressure to use drugs.

The themes of self-respect and making morally right choices that D.A.R.E. emphasizes tie in well with the gospel values that students are taught regularly at the school. “They’re getting the same messages from both organizations, which is nice,” Corpus Christi principal Elizabeth Pinto said.

Pinto said that the children are definitely getting the message, particularly because “the teachers reinforce it every day, and they tie it in with religion classes. So it’s once a week with Officer Baker, but then it’s on a daily basis reinforced with the children.”

Pinto said that the students very much like the program and that “Officer Baker is a big hit. They love him, and he really knows how to relate to kids, so he gets through to them…And you can see in the behavior of our kids [that] they know how to make good choices, which is refreshing.”

The spiritual aspect of the message was brought home in the opening prayer offered by Father Gabriel Perdomo, parochial vicar at Corpus Christi parish. He invoked St. Michael the Archangel, who is known as a spiritual warrior, imploring him to help the children resist the temptations of the devil.

Students Lucyann Wolfsohn and Matthew Cornelius were masters of ceremonies for the event, introducing the various elements of the ceremony.

Hasbrouck Heights Council members Josephine Ciocia and Ron Kistner were in attendance. Ciocia spoke on behalf of Mayor Jack DeLorenzo, She thanked Det. Sgt. Baker and Chief Michael Colaneri for their work with the local D.A.R.E. program, and said that the Mayor and Council were all proud of the students.

Colaneri spoke to both the kids and their parents. He conveyed the many tragic times he has had to come to people’s doors and tell them that a loved one has died from using drugs.

Colaneri noted the three parts of the triangle depicted on the D.A.R.E. logo – school, police and parents. He told the parents that they are the most important part of the triangle, because they have the most influence on their children. He said that the children may have “thousands of friends” throughout their lifetimes, and that they need Mom and Dad to be their parents, not their friends; and to not be afraid to make rules and enforce them.

Colaneri told the kids that the police department is always available to them, even if they just need to talk. Amusedly, he said he hates to hear parents try to get their little kids to behave by saying that a policeman will put them “in jail” if they aren’t good. The police don’t put children in jail, he reassured everyone.

The fifth-graders displayed and spoke about the pictures that they had made which depict people using the resistance strategies that they had learned to use should anyone offer them drugs, cigarettes or alcohol; or pressure them to use the substances (“Ways to Say NO”.) The pictures illustrated such strategies as changing the subject, offering alternative activities (“Let’s play basketball”), avoiding the situation (staying away from people who make trouble), giving excuses (“I have to go play soccer”), or simply walking away.

Baker noted that it was very difficult each year to choose winners in the annual D.A.R.E. essay contest, because of all the excellent entries. The two winners for this year, one from each fifth-grade class, were Lucyann Wolfsohn and Nicholas Percontino, who read their essays before the assembly. In their writings, both students emphasized the harmful effects these substances have on the body, including how addictive they are. Wolfsohn noted that nicotine tells the brain to keep on smoking. Percontino wrote that kids often think it is “cool” to use these substances, but that it really is not. He also wrote of the many ways people can be bullied into using drugs; including physical, verbal, and internet (cyber-) bullying.

Wolfsohn noted an alternative meaning to the acronym D.A.R.E. which helps people make good decisions: 1) Define the situation, 2) Assess, or determine, the consequences of a decision, 3) Respond, using the facts at hand, and 4) Evaluate, or review, the decision.

All together, the students sang the “I Will D.A.R.E.” song, which puts still more words to the name of the program – Don’t do drugs, don’t have an Attitude, Respect yourself, and Educate yourself. The kids also recited a D.A.R.E. Promise and a “pledge to be drug-free.” Each child received a certificate for having completed the program.

Baker said that while some schools around the country have replaced the D.A.R.E. program with others that some believe to be more effective, he himself believes that D.A.R.E. works. He noted the fact that some will often bully kids to get them to do something they do not want to do. He noted that vaping –- inhaling via electronic cigarettes –- was the new danger that kids are facing.

Baker cued the kids to recite the short-and-sweet D.A.R.E. motto; “Be safe and be responsible.” One of the juvenile emcees said that Baker was “an awesome D.A.R.E. teacher.”

In her final remarks, Pinto noted “how challenging life is getting out there” and said that “we’re blessed because we can bring our religious faith into our discussion.” She said that the kids are “called to goodness” and to grow in wisdom, knowledge and the ability to choose good. “Be strong,” she told them, “because you will be tempted…Take these lessons with you, and act on them.”