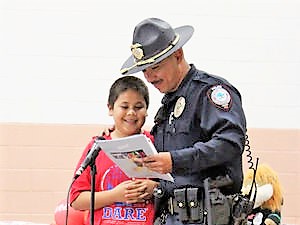 “I hope these D.A.R.E. classes will remain with you for the rest of your life,” said D.A.R.E. instructor and Cocopah Tribal Police Officer Jesus Verdugo. “D.A.R.E. was to help educate you on the dangers of drugs, peer pressure, stress, bullying and how to overcome them.”

Verdugo, who has been with the police department for nearly five years, was himself a D.A.R.E. student when he was a fifth-grader. This past summer, he became a certified D.A.R.E. instructor, making him the first Cocopah police officer to serve in this capacity.

D.A.R.E.’s vision statement is to create “a world in which students everywhere are empowered to respect others and choose to lead lives free from violence, substance abuse and other dangerous behaviors.”

The class Verdugo taught lasted 10 weeks and was held one day per week.

As part of the program, students wrote essays on what the program means to them and how they will use what they learned moving forward.

Verdugo presented the award-winning essay writers with a medal and the chance to take center stage with him and read their essays aloud.

D.A.R.E. was founded in 1983 by then-Los Angeles Police Chief Daryl Gates and the Los Angeles Unified School District. Since then, the D.A.R.E. program has grown to become an international outreach effort, training students in countries as close as Canada to those as far away as Saipan.