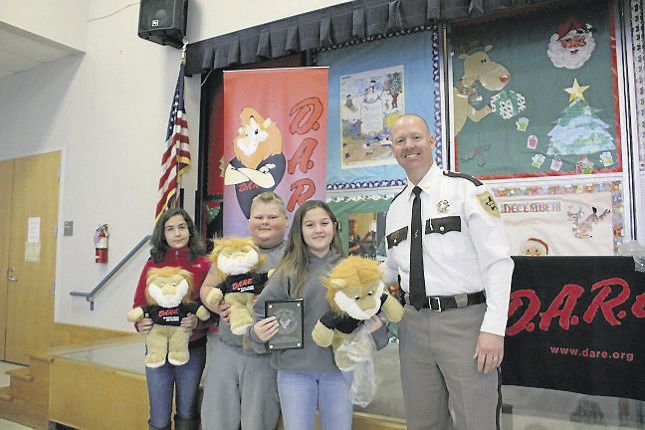 “[D.A.R.E.] was one of the things citizens wanted. We planned to implement a substance abuse program. D.A.R.E. was revamped to go with Virginia [Standards of Learning], so we thought it was worthwhile to launch the program in 2017,” said Sheriff David Hill.

Each school recently hosted a D.A.R.E. graduation ceremony for completing the 10-week program.

“[D.A.R.E.] provides a lot of support for our students in terms of providing drug education awareness and also it follows up with our bullying awareness program. It also provides some of our counseling standards that are required by the state,” said Carolyn Ware, assistant principal at Tye River.

Shafer, along with Hill and Chief Deputy Larry Cindrick, were present at the graduations alongside parents and school staff members.

“It’s great to see [the students] truly learned quite a bit from [Shafer], and they’ll be able to apply what they learned in their life,” Hill said.

“[The students] were eager to write that essay and put out the information they learned. All of them have done a wonderful job,” Shafer said.

Both Ware and Rockfish River’s principal, Kim Candler, said they were excited to have D.A.R.E. in their schools again.

“The deputy did an outstanding job of covering strategies with our students during this 10-week program this year. The instructor was well organized, and the Nelson County Sheriff’s Department worked well in planning for the implementation with our school,” Candler said in an email.

Ware said students learned about more than just how to resist drugs and other substances.

“I would definitely say that [the students] learned a lot more than they knew before about drug resistance, how to say no to drugs and how to avoid getting into peer pressure across all boards, not just with drugs but in a lot of social situations,” she said.

Having the program in the elementary schools provides a better chance to influence the students, Ware said.

“When we can educate them at this age and give them the tools on how to navigate those social situations and conflicts, we can prepare them for middle school, where they need to navigate larger groups and situations. We are helping them build a platform where they’re going to stand on their own two feet,” she said.

Through the program, Shafer said he was able to develop trust with the students and the schools.

Shafer said teaching the program was “probably one of the best things” he has been a part of.

“We just had graduation, and I miss them already. It’s such a pleasure seeing these kids retain this knowledge and being able to ask them questions about it. I can’t even explain it. It’s a wonderful thing, it really is,” Shafer said.

From The Daily Progress