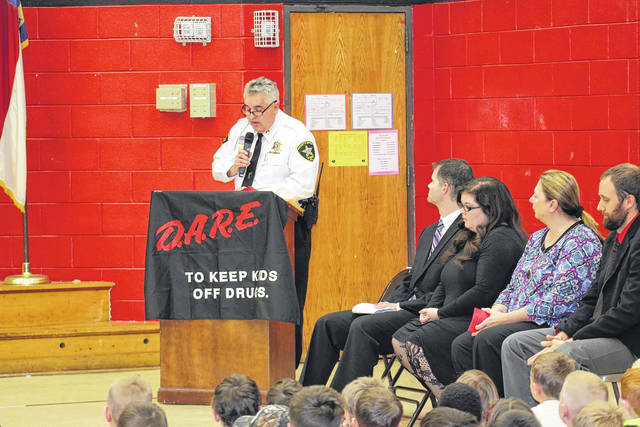 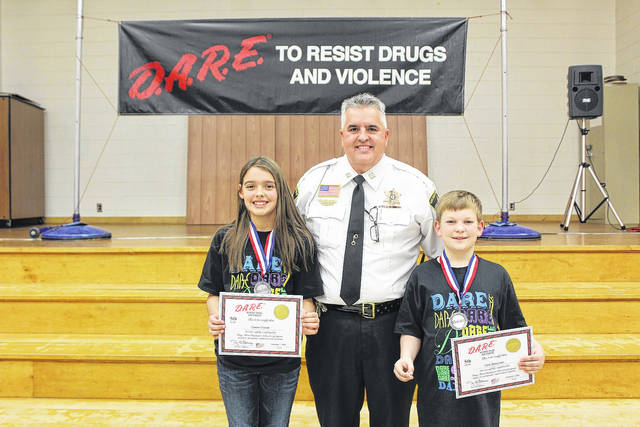 Twenty-two fifth graders at Pine Hall Elementary were recognized on Friday afternoon for completing a 10 week D.A.R.E. course where they learned to respect others and lead lives free from substance abuse and dangerous behaviors.

Parents and grandparents snapped photos as students ambled to the stage in matching D.A.R.E t-shirts and later received a graduation certificate.

Captain Danny Bottoms, who’s taught the program in Stokes County since 1992 said the graduation is intentionally designed to make a lasting impression.

“This is an event we want students to remember,” he said. “I want them to go back to this day when they’re faced with peer pressure or challenges. I want them to remember what they learned and the commitment they made to make good choices.”

Bottoms said the D.A.R.E program has evolved over the years and has become more interactive.

“I come in once a week and I think initially they’re a little nervous because of the uniform, but that doesn’t last long. We spend time talking about decisions and how the choices you make determine your future.”

The curriculum also touches on being responsible, forms of bullying and gateway drugs. Currently, there are 76 counties in the state who incorporate the D.A.R.E program.

“It does take a commitment on a community to keep this program going,” Bottoms said. “But when we see where the heroin epidemic is, we need to strive even harder to keep as many kids from going down that path.”

Bottoms occasionally runs into former students, now adults, and sometimes asks if the program helped them.

“I’ve never been told that it didn’t and I’ve asked people to be honest. I’m not saying kids will never make a bad choice after going through D.A.R.E, but I believe it leaves an impact.”

Each fifth grader in Stokes County goes through the 10 week program and will go through it again in the eighth grade.

“It’s the same type of material, but it’s designed for that age group,” Bottoms said. “By middle school, some have made bad choices, but we’re going to remind them that it’s not too late to make positive changes.”

From The Stokes News