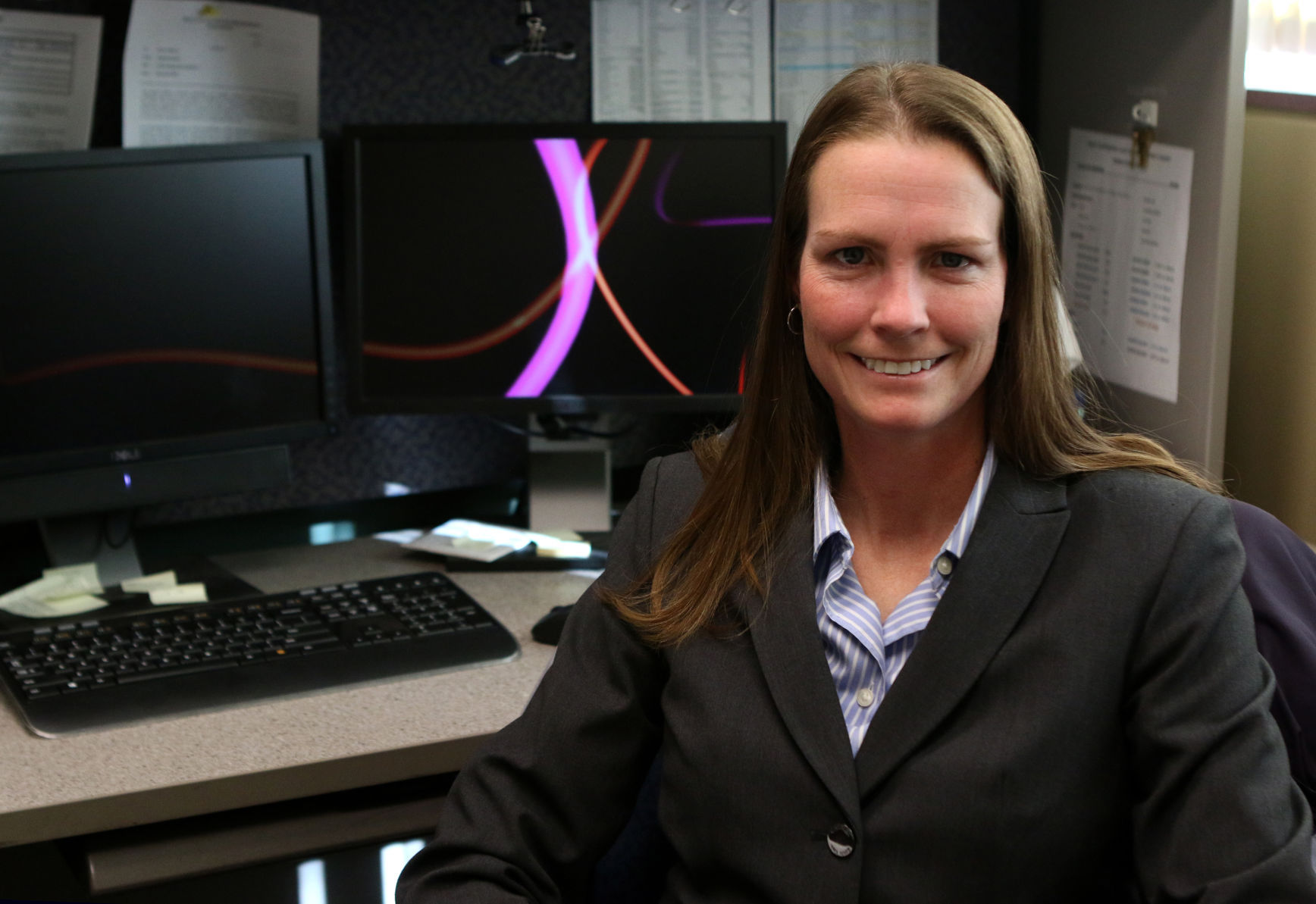 Lt. Erin Freidline in her office at the Riley County Police Department. Freidline said meeting a female officer when she was a student made her want to pursue a job in law enforcement.

Erin Freidline didn’t know early in life that she would be part of the police force.

All she knew was a D.A.R.E. officer who visited her class in the sixth grade ignited something in her to serve her community in some way.

Now the Riley County Police Department lieutenant,39, has been named one of the International Association of Chiefs of Police “40 under 40,” an honor that recognizes young law enforcement officials who “demonstrate leadership and exemplify commitment to their profession.”

“It was an honor in and of itself to have a peer out there that nominated me,” she said. “I knew it would be tough competition to compete with these international people that seem to accomplish so much in their careers, so I answered the (background) questions and hoped for the best.”

That D.A.R.E. officer was her first encounter with a female law enforcement officer, which Freidline said was important for her to see at that age.

“I think that sort of sparked the interest. I loved to see her confidence in herself and her ability to do her job, and there wasn’t anything she couldn’t do that a man could do,” she said. “I didn’t know, I don’t think, that I wanted to be a cop just yet, but it really lit a fire in me like, ‘I want to be like her. I want to have that kind of confidence and do good for people and competent in what I’m doing.’”

The confidence and competence came together at RCPD when she joined in 2000.

After she graduated from Kansas State University with a degree in criminology, the Herscher, Illinois, native said she liked the area and wanted to stick around.

“It’s just, in general, a good, safe place to be and they make you feel very welcome here,” she said. “It’s not hard to walk out of this building and meet someone when you’re walking through the mall or somewhere else and they have a smile on their faces. They’re all generally happy people. I’m that way, so I’m just attracted to that goodness about Manhattan.”

The goodness is not always what the public hears about from the police department, but Freidline said it’s there. She worked her way up the ranks and is now the highest-ranking female sworn officer at the law enforcement agency. In her time, she has won the RCPD’s hardest worker award and was unanimously voted the hardest working supervisor by her peers. Next year, she’ll continue working hard on her next project, a mentoring program for women in the department.

“One thing I’m working on here is mentoring the fellow ladies that I work with. There’s another supervisor, Diane Doehling, and I, we’re working on setting up a mentoring program in 2018 to try and encourage women in our department and try and build them up and try to inspire them to reach their goals,” she said. “And any female officers, I’d like to see some of them promoted if that’s what they want to do in the future.”

Freidline will do that during work hours. After work, she said she likes to spend time with her husband and three kids.

She also likes to exercise, participate in her church group and Bible studies and do work on their hobby farm.

She and her oldest daughter work on 4-H projects, something she did not really do as a kid.

“It was something my siblings did, but I never did. It’s something in the community that we’ve taken an interest in,” she said. “It’s nice to have a project we get to work on together.”

The farm and her family are some of her best escapes from the office, she said. The job has the drawbacks that can make it difficult.

“Dealing with the family members of the victims of something, especially when there’s a death involved, that can be the emotional baggage you take home, so that can weigh on you a little bit,” she said. In Manhattan, though, she said she has far more good days than bad.

“It’s not all doom and gloom by any stretch of the imagination. I think the fun part is when you’re on patrol; that’s the heartbeat of the organization, because you’re truly the first responders to the crimes and the need to show up and either slow down chaos or help someone, whatever it is, you get the initial person to be the initial helper in whatever their needs are,” Freidline said.

“I often tell my detectives on the investigations side, we always seem to be playing chess versus checkers on patrol where you’re working through cases and trying to put together a prosecutable case.”

Freidline said her job varies day-to-day; she works on anything from financial crimes to sexual assault crimes. She said she likes the days where she and her team are on the streets.

Other times, she has to pick the days where she stays at the office.

“It can be that adrenaline junkie’s best friend on the days we get to get out of the office and get to do some real police work.

“Then there’s the side you never see on TV where someone’s reading all the reports and trying to put together those prosecutable cases,” she said. “I have a great group of detectives that I work with, solid individuals and very competent and they do very good work so that makes my job easier. And they’re actually pretty fun to hang out with.”

Her supervisor, Captain Tim Hegarty, has been working closely with Freidline since May and said she is a good example of servant leadership.

“She is an incredibly hard worker,” he said. “She is willing to do whatever she asks others to do.”

He also said she has achieved her sixth-grade goal of doing her job well.

“She is very competent and technical, and she is very open to self-improvement,” he said. “She always seeks feedback to continue to grow as a leader.”