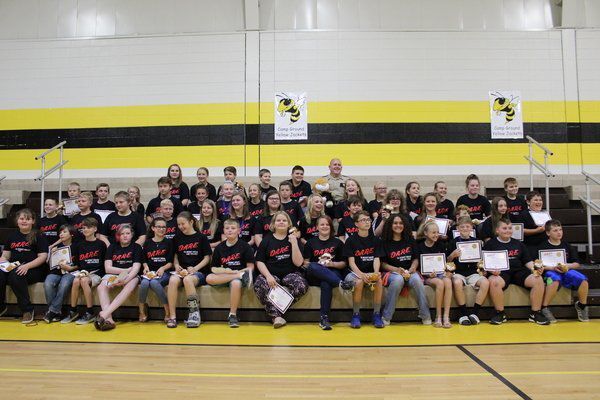 Family and friends of fifth-graders at Camp Ground Elementary gathered in the school’s gymnasium to watch over 50 students graduate from the D.A.R.E. program.

The 10-week program, led by Laurel County Detective Kyle Gray, educated Camp Ground’s fifth-graders on the risks of drugs and alcohol. Each student submitted an essay about what they learned to complete the program, and a student from each of the three fifth-grade classes was chosen by a panel to read theirs at the graduation and awarded a medal.

“There were several more just like that,” Gray said commending the overall quality of the essays. “I wouldn’t have been able to choose, so I’m glad we had somebody else choose.” This was Gray’s first year leading the program, as he had to take a two-week instruction course in which he was taught how to manage a classroom with his given time.

The three winning essays from Brylee, Treyton and Alexis drew from their personal experiences, had overarching themes about how drug use by their loved ones directly impacted their family members and themselves, and explained what wisdom they gained from the program.

“I had great pride in the students, especially the ones that won the DARE essay,” said Deanna White, one of the three fifth-grade teachers at Camp Ground Elementary.

White also said all three teachers learned more about how many kids truly face hardships in their homes and that this gave them a broader perspective for the challenges they face. Gray echoed her sentiment.

Principal Mark Wells said the three selected essays were the best collective group he had read since he had been principal at Camp Ground Elementary and added he was also sure this quality extended to the others submitted.

On top of being taught the hazards of drugs and alcohol, students were educated about the jeopardies of tobacco, peer pressure, bullying and violence, and also learned how to make responsible decisions and avoid dangerous situations. Gray taught 45-minute lessons every Thursday at Camp Ground Elementary and did the same at Bush Elementary on Fridays.

While the D.A.R.E. acronym stands for Drug Abuse Resistance Education, students are also taught the D.A.R.E. decision making model that stands for defining the problem, assessing the challenge and available choices, responding to the problem with what they’ve learned in the program, and evaluating the decision they made.

Students were obsessed with Daren the Lion, an 18-inch stuffed lion wearing the iconic D.A.R.E. program T-shirt, and with multiple students asking if they could take Daren home with them after school, Gray said. So, when each student walked across the gymnasium to get their D.A.R.E. graduation certificate, they were also given a six-inch miniature version of Daren the Lion wearing a graduation cap.

After students were given their certificate and personal versions of Daren the Lion, Wells spoke again and repeatedly quoted Nancy Reagan’s iconic catch-phrase, “just say no,” which was also the name of the anti-drug program she was an ambassador of during her time as First Lady.

“Drugs are a major problem, not just here in Laurel County but everywhere” said Gray.

From The Sentinel Echo 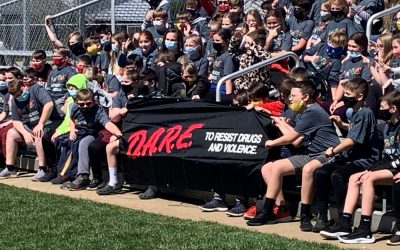