The St. Bernard Sheriff’s Office honored more than 100 fifth-graders at J.F. Gauthier Elementary School in St. Bernard and Our Lady of Prompt Succor School in Chalmette on Dec. 16-17 who completed a 12-week program in Drug Abuse Resistance Education, or D.A.R.E. taught by instructors from the Sheriff’s Office.

It was the last DARE graduation of the fall semester, which saw nearly 400 students graduate the D.A.R.E. program at five schools, also including at Lacoste, Joseph Davies and Lynn Oaks.

Lt. Lisa Jackson, commander of D.A.R.E., and Sgt. Darrin Miller are the instructors for the program, which was re-established in 2009, four years after Hurricane Katrina.

D.A.R.E. is aimed at trying to keep young people from using drugs including tobacco and alcohol, or taking part in violence or bullying of others.

Sheriff James Pohlmann told children they must concentrate on making the right choices to have productive lives, including listening to their parents and teachers and deciding who they should and shouldn’t associate with.

The sheriff also praised those relatives of the graduates who turned out for the ceremony for showing their support for the students.

He encouraged them to continue staying focused on their children, including talking often with them and looking for warning signs to help prevent drug use or be alerted to them actually using drugs.

If necessary, drug test kits are available at pharmacies to test young people, the sheriff told parents. If there is a problem it is important to rescue them before they become involved in the criminal justice system and end up in prison, the sheriff said.

If parents see signs of possible problems, don’t be hesitant to ask what is happening. “It’s not something they will grow out of and it needs to be addressed,” the sheriff said.

Maj. Chad Clark, commander of the Special Investigations Division including the Narcotics Unit, said it takes the kind of education effort given by Sheriff’s Office drug resistance instructors at parish schools to affect the drug problem in America and solid law enforcement to stop drug dealers.

The resurgence of the deadly drug heroin is concerning law enforcement and health care officials throughout the nation and is something parents should be paying close attention to, Clark said.

But Clark said overdose deaths have been going down in the parish because of a combination of factors including law enforcement diligence. 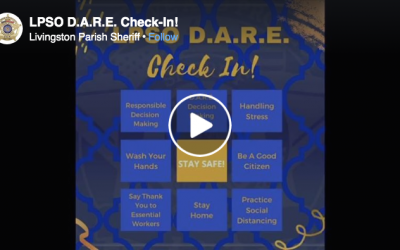