Over 400 Students Graduate from D.A.R.E Program 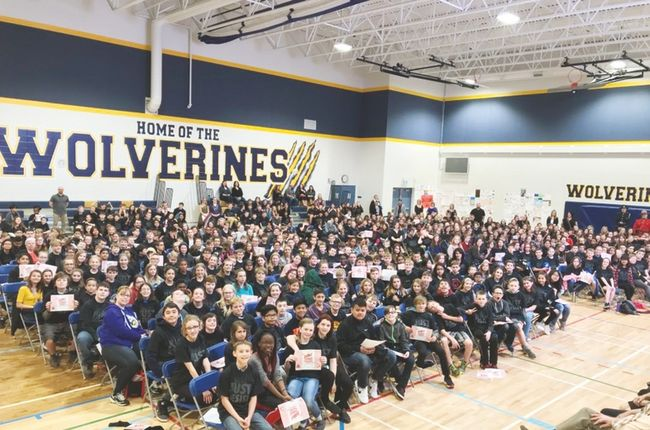 460-plus Grade 6 students between Black Gold Regional Schools and STAR Catholic completed the D.A.R.E. program under the tutelage of SRO Cst. Muz and City of Leduc CPO Brad Agotnes.

Twenty grade 6 classes from around Leduc County graduated from the D.A.R.E program earlier this month.

The end of this year’s program was marked with a graduation for students, teachers and parents to celebrate at West Haven School. Leduc Mayor Bob Young, Councillors Laura Tillack and Beverly Beckett and D.A.R.E. Chairperson Connie Greer attended the ceremony.

All 468 students that participated this year completed a report and poster showcasing what they learned with one student from each class winning a prize for the best report. Out of those 20 students Madison Metrunic won the grand prize of an iPad donated by the Leduc Youth Justice Committee.

The D.A.R.E. program was brought back to Leduc last year after being gone for the previous four. Constable Muz said the course teaches students to act in their best interest when facing high risk choices involving drug and alcohol use and violence.

“Ultimately, I think they’ll make the right choices but we give them the tools on how to make those choices so that they know that what can happen might have a negative outcome,” Muz said.

One of the things Muz said he enjoys about teaching youth is showing them that police officers are just regular people.

“I’ve worked with youth for 13 years and I love being a positive role model for them. It gets me in the classes and they get to see a police officer in there just acting normal. I build those positive relationships with them so when they get older they can actually turn to the police and talk to them comfortably,” said Muz.

D.A.R.E. is an international program that began in Los Angeles in 1983. It’s offered in over 52 countries around the world.