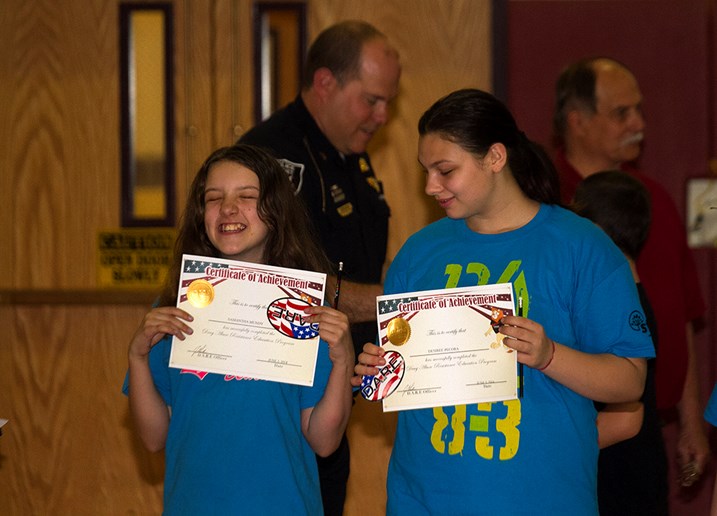 For nearly 30 years, the Sidney Central School District has participated in the D.A.R.E. Program. This past Tuesday, the school maintained that tradition and held its annual graduation ceremony for the fifth-grade class.

Fifty-seven students graduated from the program during the ceremony, which was led by Sidney Police Department Sargent Jan Gorshack.

Gorshack, who teaches the 13-week course, completed his 18th year of doing so. Gorshack meets with each of Sidney’s four fifth-grade classes once a week for 45 minutes.

“This is a blast,” he said. “I enjoy it. When you work with kids each day, how can you not enjoy it.”

Founded in 1983, D.A.R.E. (Drug Abuse Resistance Education) is a program designed to give kids the skills they need to avoid involvement in drugs, gangs and violence, according to the organization’s website. The program, which is in 75 percent of classrooms in the United States and in more than 43 countries around the world, is a police officer-led series of classroom lessons teaching kids how to resist peer pressure and live productive drug and violence-free lives.

Sidney was the first school in New York to get involved with the D.A.R.E. program, which still goes by its original principles, but also focuses on decision making, bullying, dealing with stress. Gorshack said there is a lot of work with decision making, and how to work through making decisions and understanding consequences.

The focus is a heavier on tobacco and alcohol use, Gorshack said. Though they still discuss other drugs, it’s not as in-depth as the tobacco and drinking.

“Most of the times, that’s what they see and what they are going to deal with,” Gorshack said.

During the graduation, each class had one student read their essay and the class also performed a skit before receiving their certificate from their teacher, Gorshack and Sidney Mayor Andrew Matviak. Kate Moshier, an assistant to Senator James L. Seward, was also on hand to give students certificates from Senator Seward.

In her essay, Savannah Baldwin noted she learned she can just say no to something she didn’t want to do. She wrote:

“All kids can say no to something they don’t want to do. Or, you can make an excuse that you have to do something else. For example, if a kid asks you to smoke, you can simply say no or make up an excuse, like ‘I have a dentist appointment tomorrow.’”

Christopher Prentice wrote he will practice what he learned in the D.A.R.E. program during his own time.

“For example, somebody I know was doing verbal bullying to me. I stood up straight and said to stop. I then walked away and the next day, he didn’t bother me again.”

Anthony Morris wrote that the lessons learned in the program go beyond the 13 weeks.

“In D.A.R.E., we have learned how to make good choices. They are not just (ones) you should know while you are in D.A.R.E., they are lifelong skills that you (have) the capability to use every day.”

Kaitlin Bookhout noted the skills she learned in the program will hopefully help her help others.

Sidney fourth graders were also on hand watching the ceremony and Gorshack noted they would be the next group to go through the program and be in this position next year.