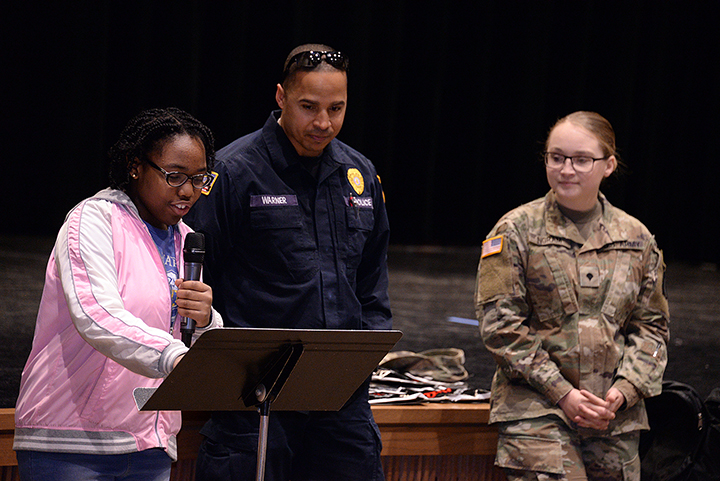 “Have you ever said, ‘Just one time can’t hurt?’ Well, I have one word for you, D.A.R.E. Do you dare make this decision that will lead you down a path of misfortune? Yes? Oh, well, maybe I could convince you otherwise.”

This was the opening paragraph of MacArthur Elementary School sixth-grader Kyndal Nobles’ Drug Abuse Resistance Education essay that led to her being named the overall essay winner during the MacArthur D.A.R.E. graduation ceremony March 5 in the school auditorium. For her win, Nobles received a backpack full of goodies including a D.A.R.E. T-shirt and the opportunity to read her essay aloud.

“It felt good knowing that I actually won something because I’ve had a lot of losses lately, so a win makes me feel good about myself,” Nobles said. “The biggest thing I’ve learned is just being myself and just basically make smart choices and don’t let other people influence me.”

“D.A.R.E. is basically to teach the kids how to make safe and responsible decisions not only in school, but in their everyday lives so that when they go out into junior high, high school and beyond they are making those safe and responsible decisions,” Warner said. “They’re just trying to not fall under that peer pressure and letting other kids influence them and doing the things they shouldn’t be doing.

“I always emphasize that it’s not perfect,” he said. “You’re not always going to make the perfect decision, but the goal is to try to make the best decision in your everyday lives.”

During the ceremony, each student was presented with a certificate and a goodie bag.

Two students were also recognized as runners-up for their essays and read them aloud.

“This program gives me the necessary knowledge to make better, informed ideas in the future,” Michelle Dillard read from her essay. “Furthermore, D.A.R.E. works to help people, whether they take drugs or not, understand that our choices don’t only affect us. …The decisions I make from this moment on will be thought out and well understood because of my confident communication.”