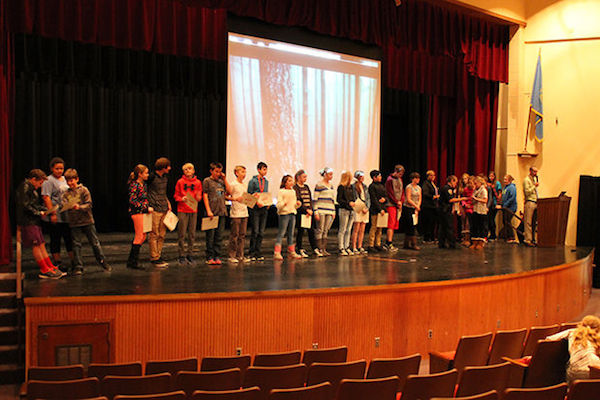 “These people over here that are here to protect and serve you every day, they come in and do this on their own time for you guys because they see the importance in this, and they’re trying to prevent some of the things that they see on a daily basis for you guys to ever do,” Assistant Principal Brady Sumner said, referring to the officers from the Spearfish Police Department who come in to teach the students during the semester: Officers Jason Gellett and Shawn Fox, School Resource Officer Candi Birk, and Cpl. Verla Little.

“Ultimately, they’d work themselves out of a job if everyone made these choices — but that’s what they’re striving for you guys to do,” Sumners said, adding, “Another cool thing about the D.A.R.E. program is that it’s completely about you and your choices. You control every bit of it. There’s not a whole lot of things between the ages of 12-14 that you control 100 percent.”

During the event, the students heard from Officer Collin Smith about the dangers of various drugs and substances and the dangers of bad decisions, and keynote speaker Fourth Circuit Judge Michell Palmer-Percy followed up on this theme. She reminded the students that the graduation did not mean that they were finished in their decision-making.

“From now on, it means you have learned the tools necessary to go out and do the real-life hard work of making the good decisions,” she said, explaining that this is the start of new chapters in their lives.

“You and only you will be responsible for the results of your decisions,” Palmer-Percy said. “Making good decisions is the sole most important thing you will do now that will create the life you want to live later.”

She told the students to ask themselves how they want their lives to look in the future, since life is the sum total of all the decisions we make every day.

“These decisions are not going to be easy. When you’re faced with a difficult decision, you will struggle, but it is so much easier to make a hard decision than it is to correct the bad decisions that you make that pile up,” Palmer-Percy said, adding that she sees the results of bad decisions in her courtroom.

“The people I see in court didn’t decide to be drug addicts or alcoholics. … They are all good people,” she said. “They were sitting at one time in the seats that you’re sitting in. They are good people that just started out with one bad decision, one decision they thought was no big deal that led to the drugs making their decisions for them. Pretty soon, they weren’t in control of their decisions — the drugs decided what their decisions would be.”

She urged the students not to let drugs take away the things they want in their lives, whether career, home, travel opportunities, etc.

The students were recognized with D.A.R.E. certificates during the graduation, and Sumners encouraged them to thank their D.A.R.E. officers.

“We love having them in the classroom,” he said.