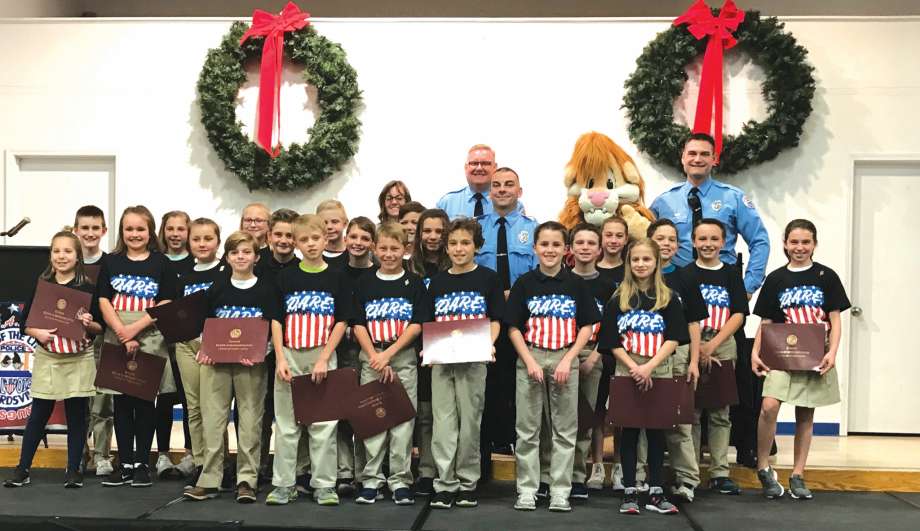 The local D.A.R.E. program, which began 27 years ago as a pilot program for the state of Illinois, is a successful statewide program that brings local police officers into public and parochial schools where the officers focus on positive interaction with the local youth in grades five through twelfth grade.

Originally a program that only taught students the dangers of drug and alcohol abuse, the D.A.R.E. fifth grade program has been revised with a new D.A.R.E. curriculum which challenges students by having them participate in active learning. “The D.A.R.E. curriculum that is taught has changed from the original program of ‘Just say no to drugs’ into a decision making process,” Edwardsville Police Department Officer Anthony Dietz, who instructed the St. Boniface D.A.R.E. program, said. “In our classes, we focus on helping the students build the necessary skills to make positive life choices when faced with the common problems of today’s young people.”

“The benefit to the students is the strong foundation of decision-making skills that they apply to real-life situations about the use of alcohol, tobacco, marijuana and inhalants,” the Edwardsville D.A.R.E. website notes. “These important decision-making skills are acted on through a spiraling set of group and paired activities. The students are actively engaged as they learn how to cope with the pressures associated with adolescence.”

Officer Dietz visited the St. Boniface fifth graders for nine weeks of lessons which culminated with week 10 that provided a review as well as the identification of people in the students’ lives that they can seek for help if needed.

The fifth graders then received their D.A.R.E. graduation certificates.

“I really enjoy the opportunity to teach D.A.R.E. at St. Boniface and the strong support from the staff at the school,” Officer Dietz said. “Teaching young people is immensely rewarding work, and I appreciate the chance to represent the Edwardsville Police Department at St. Boniface School.”

From The Edwardsville Intelligencer

Delaney O’Sullivan grew up with the D.A.R.E. program. The Plainfield South High School sophomore started in the program when she was in first grade at Holy Family Catholic School and completed D.A.R.E. 2.0 in seventh grade. Now O’Sullivan is serving a two-year term as...