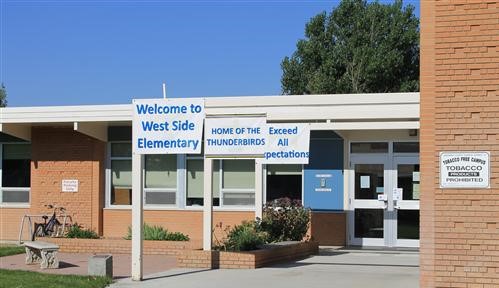 WORLAND – Friday afternoon, Worland fifth-graders celebrated their graduation from the D.A.R.E. (Drug Abuse Resistance Education) program with a small celebration in the café-gym-atorium of Worland’s West Side Elementary School with guest speakers, recognition of students with winning essays and refreshments.

“We did things different this year because they are all at the same school. In the past we’ve passed out the certificates and give them their shirts, this year we actually had speakers come and talk and we passed out the shirts in the classes. I thought our speakers did an amazing job and I think the kids learned a little bit more. It’s one thing hearing us say stuff for 10 weeks and it’s another thing hearing it from people in the community and older kids that they see all the time. I think it went really well, I was pleased,” D.A.R.E. instructor and Washakie County Sheriff Deputy Colleen McClain said. “It’s kind of nice having the schools all together now because we can do things like this, have people come in and talk. Honestly, we haven’t done that in the past,” she added.

Six of the fifth-graders, Brody Theil, Jace Erickson, Keirra Woffinden, Amaya Leyva, McKenzie Ray, and Mikaela Garay were honored for their winning essays about what they learned from participating in the D.A.R.E. program and what they planned on doing with what they learned, by reading their essays to attendees of the graduation and receiving a medallion.

McClain stated that the winning essays were judged by their peers. She explained that the four best essays from each class were chosen by the students to be brought back to the law enforcement center for further judging. “Once the kids have turned in all their essays they get up in front of the class and they do an oral report on D.A.R.E. and then the kids get to decide who they think has the best essays. I take those back to the law enforcement center and I have the secretary, the sheriff and the chief of police read the essays and they pick the essays that they feel are the best,” McClain said.

The D.A.R.E. program is a 10-week program which began in the early 1980s to help students say no to drugs and alcohol. Over the years the program has transformed from “don’t do drugs” to “making good choices.”

During D.A.R.E. the students are taught the D.A.R.E. decision-making model. The model teaches them to define, assess, respond and evaluate. McClain stated that when learning the model the students are given scenarios which the students need to define what the problem is, assess their options, respond with a choice, evaluate whether their choice was good or bad, and then consider what they think the consequences will be.

Students learn about making safe and responsible choices with more scenarios and the possible positive and or negative consequences.

Resistance strategies are also discussed in length. The five resistance strategies are avoid the situation, strength in numbers, walk away, say no with an excuse or reason and change the subject. “Avoiding the situation is not going somewhere if you know drugs or alcohol are going to be at that place. Strength in numbers is hanging out with people that aren’t using because then you are not going to be pressured into doing something you don’t want to do. Walk away, if someone is asking you if you want to smoke or something, say no and walk away. We talk about a lot of times that doesn’t work because they will keep coming and keep asking so then the next one is saying no with an excuse or a reason. No, if I do that I will get kicked off the basketball team or my mom and dad are going to be really angry or whatever your excuse is going to be. Change the subject, if they are asking you to go do something, go to a party, to go smoke a cigarette, change the subject. I’d rather go play basketball or I would rather go do something else, invite them to go do something different. If they want to go to a party, say instead of going to this party let’s go do this instead, let’s go fishing, let’s go hunting, let’s go do whatever,” McClain explained.

D.A.R.E. students are also taught to be good citizens and what it means to be a good citizen. “Ways that they can help people. We talked about if they have an elderly neighbor maybe go help them take the groceries in or mow their lawn in the summer time or shovel their sidewalks. For their parent, instead of being asked all the time to take the garbage out, to take the initiative and just take the garbage out so they are not constantly being asked. Being a help and being an asset to the community,” McClain said.

Many more lessons are discussed during the 10 weeks, such as; responding to pressure, stress, drugs and tobacco health effects, standing up for themselves and communication. All designed to help students learn to make decisions that will be good for them and good for the others around them.

McClain stated that she enjoys getting to know each and every student and their uniqueness and appreciates being able to help the students have the tools they need to make good, safe decisions now and in the future.